Hodge has dedicated the past four years of her life to staging provocation after provocation against left-wing Labour members through slanderous and politically toxic accusations of anti-Semitism—targeting party leader Jeremy Corbyn in particular. But the fact that she has been able to do so is thanks entirely to the cowardice and complicity of Corbyn and his closest allies.

In 2016, Hodge triggered a failed right-wing putsch to oust Corbyn as Labour leader by submitting a motion of no confidence against him. In 2018, she cornered Corbyn behind the Speaker’s chair in the House of Commons and screamed in his face, “You’re a fucking anti-Semite and a racist!” She claimed at a meeting in which Tory MP Chris Green called for Labour councillors and MPs to “eject” Corbyn that she had experienced “anti-Semitic abuse” in the Labour Party “greater in number and more horrid in content than what I was subjected to by Nick Griffin and the [fascist] BNP [British National Party].” 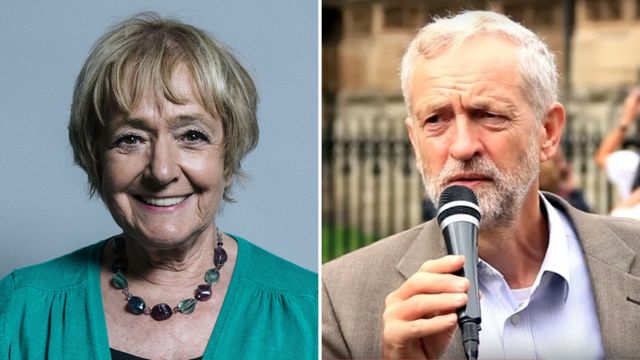 Corbyn’s response was to first drop the investigation into Hodge’s lying verbal abuse against him, to tell her and the rest of Labour’s Blairite MPs at the party’s 2018 annual conference, “We are on a journey together and can only complete it together,” to have Labour accept a definition of anti-Semitism that criminalises opposition to Israel and to offer no opposition to a politically motivated investigation by the Equality and Human Rights Commission into “anti-Semitism in the Labour Party.”

Last month, political cowardice turned to farce. Hodge was triggered for reselection as Labour’s MP for Barking, meaning she would have to win a vote of the local Constituency Labour Party (CLP) to keep her position. At a meeting on October 28, Hodge was able to secure a majority in her favour in an outcome greeted throughout the media as a victory of Labour “moderates” over a “Corbynista” plot backed by pro-Corbyn pressure group Momentum.

This provided an opportunity for fellow Labour MP Ruth Smeeth—the chair of the Jewish Labour Movement who was revealed by WikiLeaks to be a CIA “strictly protect” asset—to declare in parliament, “I just want to put on record the fact that Margaret Hodge, the honourable (member) for Barking, has been reselected this evening, against an appalling attack by members of our party.”

The Board of Jewish Deputies (BoJD) added, “Trolls who opposed her reckoned without Margaret’s strength and popularity. Not lost on anyone that Labour’s so-called ‘anti-racist’ leader missing in action as his drones tried to force out another Jewish MP.”

However, the architects of this “moderate” victory were not Hodge, Smeeth and the BoJD, but Momentum, who had never tried to unseat Hodge in the first place! Barking and Dagenham CLP member John Pawson explained on the Labour Party news site LabourList:

“It’s not a left-wing coup as the media have suggested. There are only about five or six of us lefties who attend CLP meetings … The handful of us on the left didn’t really know how the trigger ballot system worked, and given the political make-up of the CLP, we all expected Margaret Hodge would be automatically reselected. The result was as much a surprise to us as it was to everyone else.

“What I’m hearing is that this move has come from those in the CLP who have supported Margaret Hodge and share her political views but had expected her to retire and wanted an MP who lives in the constituency.”

Jon Lansman, the leader of Momentum, concurred in a tweet on September 29: “The Left is most certainly not behind the triggering of Margaret Hodge in Barking nor was it the result of antisemitism. I’m told it happened because members on the Right had expected her to retire & want an MP who actually lives there, not one who has always lived in Islington.”

Asked why he was not working to remove her, Lansman replied, “Because the Left is too small a minority in Barking to acheive [sic] it.”

Lansman’s refusal to fight in Barking is part of an ongoing effort—agreed with Corbyn and his advisors—to suppress left-wing sentiment in the membership and maintain unity with the Blairite core of the Parliamentary Labour Party.

The Hodge affair is only the most devastating exposure of Momentum’s fraudulent deselection campaign, announced this July with the claim, “Campaigning for open selections across the country will help surface a new generation of young, BAME, working-class leaders who will take on the political establishment and provide a genuine alternative.”

Since then, just eight Labour MPs have faced reselection battles, most unrelated to challenging Blairite MPs. Of those reselections involving Momentum, not a single “left” challenger has been successful.

As LabourList editor Sienna Rodgers explained in the Guardian, “far from facilitating a Corbynite takeover, the trigger-ballot battles taking place across the country have allowed the Labour leader’s critics to come out largely unscathed and better organised than ever… what has stunned insiders is the sheer number of Corbyn sceptics who haven’t been triggered.

Claims that Corbyn would carry out a “socialist transformation” of Labour and create a party “for the many not the few” have proven to be a fraud. Including their role at the 2018 Labour conference sabotaging popular moves for mandatory reselection and then shutting down no confidence votes and reselection campaigns, Corbyn and his allies have done everything in their power to ensure that Labour remains the party of the Blairite “few” against the “many” thousands of members who want to see the latter gone.

They have given arch-reactionaries the platform to attack those who joined the Labour Party in 2015 to back Corbyn’s professed anti-war and anti-austerity politics. This takes its most abhorrent form in the return to the political stage of the war criminal Tony Blair, who recently wrote in the Financial Times, “Tactical voting will be necessary to return politicians who do not spout populism.”

Populism, for Blair, means any criticism of “dodgy landlords,” “billionaires” and a “corrupt system.” His favoured politicians include the Liberal Democrats and pro-Remain MPs expelled from the Conservatives by Boris Johnson in September for rebelling over Brexit, most of whom have now been readmitted to the Tory party—“Parliament would be worse without [them].”

Blair knows that Corbyn will not lift a finger against him and his cronies, despite Labour’s constitution explicitly stating that any member “who joins and/or supports a political organisation other than an official Labour group or other unit of the party” will “automatically be ineligible to be or remain a party member.” By contrast, Corbyn has allowed his supporters to be expelled on the pretext merely that they retweeted statements of Green Party leaders and other non-Labour figures like George Galloway.

The Blairites can do what they want, when they want. The measure of Corbyn’s politics is that, through his own efforts, he enters his second general election at the head of the same party fundamentally that launched the 2003 war in Iraq, the 2008 bailout of the banks and launched the drive for austerity.

Any incoming Labour government poses a grave danger to the British working class. The only solution is to build an independent revolutionary party on a genuinely socialist, internationalist programme. The Socialist Equality Party is standing in the upcoming election to win workers and youth to this perspective