The neo-conservatives who have duped President Trump into the “steal the oil” scheme in Syria are already distancing themselves from the plan. They know that it will end in failure.

Yesterday the New York Times tried to insinuate that the U.S. military was behind the idea to steal Syria’s oil:

Days after President Trump’s abrupt decision to withdraw 1,000 American troops from Syria, Gen. Mark A. Milley, the chairman of the Joint Chiefs of Staff, saw a way to turn it around.

The businessman in Mr. Trump had focused on the Syrian oil fields that, if left unprotected, could fall into the hands of the Islamic State — or Russia or Iran. So General Milley proposed to a receptive Mr. Trump that American commandos, along with allied Syrian Kurdish fighters, guard the oil.

“We’re keeping the oil,” Mr. Trump told reporters on Wednesday before his meeting with President Recep Tayyip Erdogan of Turkey. “We left troops behind, only for the oil.”
…
“I credit Milley with convincing the president to modify his Syria decision,” said Jack Keane, the former Army vice chief of staff, who spoke several times with Mr. Trump and General Milley last month during the frenzied days of the president’s zigzagging Syria policy.

But the article later says that it was not General Milley’s idea. He had different plans:

One proposal would have kept a small force to help control a small swath of the border between Iraq and Syria, about 10 percent of the area. Another option would try to keep control of a larger part of the country — more than half of the area the American and Kurdish fighters currently controlled.

But after Mr. Trump told General Milley he wanted to keep the oil fields, the Pentagon quickly “operationalized” a new plan wrapped around using American forces and their Kurdish allies to protect the oil …

The report also conflicts with earlier reporting by NBC which said that it was the head of the neoconservative Institute for the Study of War Jack Keane himself and the neoconned Senator Graham Lindsay who duped Trump into the stupid plan:

In the days after President Donald Trump paved the way for Turkey to invade Syria, several of his closest allies went to the White House — twice — to try to change his mind, according to four people familiar with the meetings.

Retired Gen. Jack Keane, a Fox News analyst, first walked the president through a map showing Syria, Turkey and Iraq on Oct. 8, pointing out the locations of oil fields in northern Syria that have been under the control of the United States and its Kurdish allies, two people familiar with the discussion said. That oil, they said Keane explained, would fall into Iran’s hands if Trump withdrew all U.S. troops from the country.

Keane went through the same exercise with Trump again Oct. 14, this time with Sen. Lindsey Graham, R-S.C., at his side, according to four people familiar with the meeting. Keane displayed a map showing that almost three quarters of Syria’s oil fields are in the parts of the country where U.S. troops are deployed, the people familiar with the meeting said. They said that Graham and Keane told the president that Iran is preparing to move toward the oil fields and could seize the air space above them once the U.S. leaves.

So why is Keane now trying to blame General Milley, the chairman of the Joint Chiefs of Staff, for causing that nonsense?

It may be that he recognizes that the operation will likely go bad.

The fight against ISIS was led by nimble U.S. special force units who are trained to travel light and to work with local proxy forces. These have now been replaced by heavier army units with Infantry Fighting Vehicles. 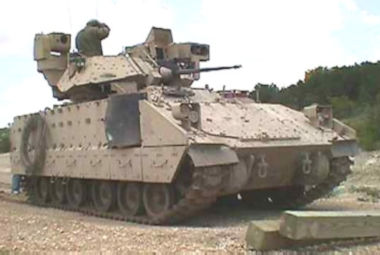 These tracked vehicles need a lot of gas and maintenance support. Those logistic needs that are easy to attack.

The U.S. special forces were previously joined by French and British ones. Those allies are not willing to join the steal-the-oil mission:

At a high-level State Department meeting scheduled for Thursday, diplomats from 35 nations and international organizations will be asked to stick with the campaign to eradicate the extremist group even after its leader, Abu Bakr al-Baghdadi, was killed in an American raid last month.

But confusion over the Trump administration’s policy in northeast Syria has discouraged allies, according to several diplomats, who said it has fomented doubt that whatever agreements are struck could be reversed by the president.
…
One foreign diplomat said Thursday’s meeting would focus on what he described as a loss of clear strategy by the United States in Syria. Another predicted the high-level talks would amount to little more than a meet-and-greet.

The diplomats also know that mission creep is part of the new plan:

“It’s quite clear that the president has been convinced to retain troops on the only basis that might have been of interest to him — the existence of oil,” said Charles R. Lister, a senior fellow at the Middle East Institute. “But the much bigger U.S. government apparatus is trying to use that as a cover to form a more meaningful, less ambiguous and more sustainable strategy focused on countering terrorism while reasserting leverage over Damascus.”

The new neo-con plan is still the old one. To use terrorists to achieve “regime change” in Syria. It will (again) fail.

The U.S. army in east Syria will pay some PKK Kurds to use them as guards and to screen the area. But the oilfield areas are Arab and the PKK Kurds are very much disliked by the Arab population.

The locals are unlikely to welcome the oil stealing foreigners. They have profited from smuggling oil to government held areas and will resist to a U.S. occupation and to Kurds who interfere with their business. A number of people in that area had joined ISIS and slipped back into the ‘local civilian’ role when it was clear that ISIS had lost the battle. Some of them will (again) be willing to fight.

Yesterday the Syrian President Bashar Assad gave an interview to two Russian TV stations during which he predicted exactly that:

Question 12: Mr. President, according to the media, Trump announced an expansion of American presence in Syria, particularly in the northeast of the country, under the pretext of protecting the oil fields. Is there a military solution to this problem? And when would such a military operation start?

President Assad: I have always said that an occupier cannot occupy a piece of land without having agents in that country, because it would be difficult for them to live in a completely hostile environment. Therefore, the immediate and most effective solution is for us to unite as Syrians and as patriots. This would cause the Americans to leave, and they would not be able to stay, neither for oil nor for anything else.

However, with time, when the occupier remains – the Iraq experience is still fresh in the minds of Americans and the result, for them, was unexpected; for us however, it was clear and I did say in one of my interviews after the invasion of Iraq in 2003 that occupation will generate military resistance. Similarly, the American presence in Syria will generate a military resistance which will exact losses among the Americans, and consequently force them to leave. Of course, we are not contemplating a Russian-American confrontation, this is self-evident, and it doesn’t serve neither our interests, nor the Russians nor international stability; it is dangerous. However, America cannot believe that it will live comfortably in any area it occupies. We remind them of Iraq and Afghanistan, and Syria will not be an exception.

Question 13: Concerning the American behavior here, particularly in relation to Syrian oil, don’t you believe that this behavior is that of a government gang? And what are the losses to Syria as a result of Washington’s behavior?

President Assad: You are absolutely correct, not only because they are looting oil, but because America is structured as a political system of gangs. The American president does not represent a state – he is the company CEO, and behind this CEO there is a board of directors which represent the big companies in America – the real owners of the state – oil and arms companies, banks, and other lobbies. So, in reference to Syrian oil, this is the expected result of the American regime, which is led by companies acting for their own interests.

Assad goes on to explain that to steal-the-oil was also the Nazi’s reason to invade the Soviet Union. He further observes:

[W]e can very simply liken American policy today with Nazi policy: expansion, invasion, undermining the interests of other nations, trampling on international law, international conventions, human principles, and others – all for the sake of oil. What’s the difference between this policy and Nazi policy? Can anybody from the American regime give us an answer to this question? I don’t think so.

[The Turkish] operation Peace Spring was not endorsed by Russia. It was endorsed by the United States, if you are accurate with the facts. They tried to negotiate with Turkey but then said they could not reach the deal so “Kurds, you are on your own, we are leaving.” Then, after they left the Kurds and left Syria, they said they do not have any more obligations to the Kurds but they are coming back for oil (not for the Kurds). It is an interesting zigzagging in foreign policy. Back to Churchill, who said that the Americans always do the right thing after they have tried everything else.

I have reasons to believe, based on the real examples of the past years, that the United States still supports al-Nusra in spite of the fact that this organisation has been listed in the United States as terrorist. They see al-Nusra as a counterbalance against the Syrian Government. It’s another mistake, after they were banking on the mujahideen, who organised the September 11 terrorist attack. After they did what they did in Iraq and ISIS was born. And now they are grooming al-Nusra in the illusionary expectation that they will be able to control them. It’s an illusion.

[Putin] added that he considers US presence in Syria as illegitimate because “those armed units are stationed there not on the invitation of the Syrian government or in the framework of a UN Security Council resolution.” ”

This military presence is illegal,” he stressed.

The steal-the-oil mission is illegal under international and likely also under U.S. law. That is why no major oil company will want to have anything to do with it.

The whole operation is destined to fail.

The U.S. has send in heavy units which are quite immobile and require lots of maintenance and supplies that can be attacked. It has no allies except for a few PKK/YPG Kurds who are disliked by the local Arabs. Mission creep will soon set in. Resistance against the occupation will grow and the U.S. troops will take casualties. Then Trump will again order them to pull out.

That is why Keane now claims that to steal-the-oil was not his idea but General Milley’s. He does not want to be remembered for causing the easy foreseeable mess in which the operation will end.

Russian troops just took over an airbase that the U.S. special forces had used for their resupply. They found (vid) ready made air conditioned quarters with good mattresses, gym equipment, entertainment and medical supplies. They will put it all to good use.

They will later do the same with the new bases the U.S. army now builds near the oilfields.