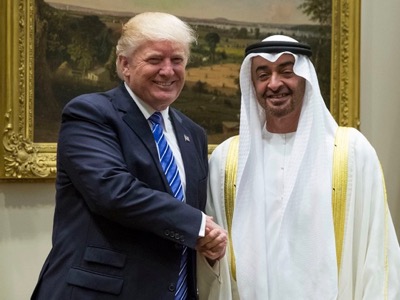 President Donald Trump continues his policy of military withdrawal from the “Broader Middle East”. To this end, he is gradually moving his troops, signing agreements with the forces against which they were deployed (e.g. the Taliban) and negotiating the release of his prisoners. At the same time, the Pentagon called on the United Kingdom to take the lead in the operations of the new Atlantic-Middle East Alliance and to supervise the continuation of the “never-ending war” in the “Broader Middle East”. Syria is considered a zone of Russian influence while the Rumsfeld/Cebrowski strategy continues with the division of Yemen into two separate states and preparations for the break-up of Saudi Arabia.

On 18 and 19 March 2020, a US citizen, Michael White, detained in Iran, was transferred from his prison to the Swiss embassy in Tehran; another US citizen, Amer Fakhoury, detained in Lebanon, was exfiltrated by US troops; and President Trump publicly requested Syria’s help in finding a third US citizen, Austin Tice.

These operations are supervised by the discreet National Security Advisor, Robert O’Brien, who has a solid experience in the release of prisoners.

Michael White served 13 years in the US Navy. He went to Iran to find his fiancée. He was arrested in 2018 and sentenced to 13 years in prison for espionage. Other U.S. citizens imprisoned in Iran – including Morad Tahbaz, Robert Levinson, Siamak and Baquer Namazee – do not seem to be attracting the same interest from Washington. Michael White was handed over to Swiss Ambassador Markus Leitner for “health reasons”. However, he is not free.

Amer Fakhoury is a famous collaborator of the Israeli occupation troops in Lebanon. He was a member of the South Lebanese Army, director of the sinister Kiam prison and a torturer. He fled from Lebanon during the Israeli withdrawal and returned, for an unknown reason, in September 2019. He was immediately recognized and arrested. He was released on the grounds that the statute of limitations for his crimes is legally invalid, but he was not allowed to leave the country. He then rushed to the US mega-embassy in Awkar under the protection of Ambassador Dorothy Shea, from where he was exfiltrated by helicopter by US Special Forces to Cyprus.

Austin Tice is a Marine Captain turned freelance journalist. He entered Syria illegally with the help of the Turkish secret service before disappearing in 2012 in Daraya, a suburb of Damascus. Eva Filipi, the Czech ambassador who represents US interests in Syria, said he was being held not by jihadists but by the Syrian authorities. This has always been denied by Damascus.

These three US citizens are most likely collaborators or agents of the CIA.

Strangely enough, the United Arab Emirates broke the US embargo and brought medicines to Iran.

Each Lebanese faction accuses the other of yielding to US pressure. Hezbollah assures that it has not betrayed the Resistance and has not secretly negotiated with Washington, while the president of the (pro-Hezbollah) Military Tribunal has resigned.

This is the first time in two decades that a US president has publicly sought the help of the Syrian Arab Republic. 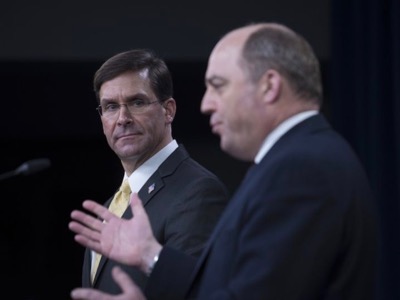 Transfer of military leadership to the United Kingdom

On March 5, US Defence Secretary Mark Esper received his British counterpart Ben Wallace at the Pentagon. The two men shared the command of the new NATO-ME [1].

Ben Wallace then delivered a speech to the Atlantic Council in which he confirmed the strength of the UK-US alliance and the availability of the United Kingdom. He also supported the need to try the “dictator Bashar el-Assad” (sic), but the impossibility of doing so given the support of the “Russian bear”. In other words, Syria remains an enemy, but will not be touched again. The war will be displaced [2]. 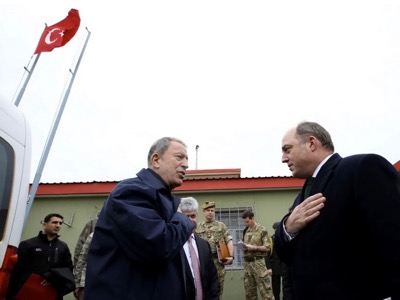 British Defence Secretary Ben Wallace and his Turkish counterpart, General Hulusi Akar, inspect the Turkish “observation posts” that serve as a fallback base for jihadists in Idleb (occupied Syria) on 12 March 2020. London assures Ankara that the Pentagon will not destroy Turkey but Saudi Arabia.

On March 12 and 13, Ben Wallace visited Turkey and jihadi-occupied Syria. He inspected the Turkish army observation posts at Idleb and conveyed £89 million in “humanitarian” donations to the families of the jihadists. The jihadists then began attacking the Turkish troops supposed to protect them, killing several Turkish soldiers.

Pursuing its policy of military withdrawal and transfer of this function to proxies, the United States is transforming the Yemen war. Originally, the Pentagon planned to divide the country in two along the dividing line that existed until 1990. It had encouraged Saudi Arabia and Israel to attack the country to exploit the oil resources of the region adjacent to the “Empty Quarter” [3] The operation was carried out with the Israeli air force, Colombian mercenaries under the Saudi flag and Emirati troops. It was coordinated by a tripartite (Arab/US/Israeli) headquarters based in Somaliland.

However, the Pentagon, relying on tribal rivalries, managed to complicate the situation to the point where the country was effectively divided in two, but also to create an equally divided Saudi Arabia/Emirates Coalition. It then had to complete the division of Yemen into two separate states without committing its own troops, before embarking on the division of the former Saudi ally into five separate states. The Quincy Pact obliges him to protect the King of Saudi Arabia, but neither his country nor his heir [4]. 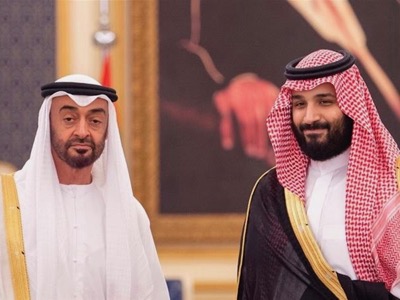 The de facto ruler of Abu Dhabi and de facto president of the United Arab Emirates, Mohamed ben Zayed, was the mentor of the Saudi Crown Prince, Mohamed ben Salmane. Gradually the student wanted to crush his master. In the end, it is the discreet MBZ that should crush the infatuated MBS.

This week, the Pentagon dispatched a warship off Aden. It installed British troops on the island of Socotra to make it a permanent military base with the United Arab Emirates and armed it with Patriot missiles. Simultaneously, the Iranian-backed Northern Houthis victoriously attacked two Saudi military bases and took more than 700 Saudi soldiers prisoner, while the UAE-backed tribes attacked the Saudi-backed tribes in Aden. The government of Abdrabbo Mansour Hadi, the only officially recognised UN authority in exile in Riyadh, lost control of Aden.

The American, British and Emirati Defense Departments do not communicate on these battles. Only the Houthis do. In the absence of official communication, the international press is blind and dumb.

South Yemen is a former British colony and the United Arab Emirates were integrated into the Indian Empire. The United Kingdom, under a US umbrella, is regaining its influence in the Gulf and the Red Sea.

This complete reversal of the situation corresponds to our analysis of the crisis. After their failure in Syria, the United States is pursuing its 2001 plan and is preparing to destabilise Saudi Arabia. President Trump validated this step on the sole condition that US troops would not participate directly, but that the Emirates would represent them.

Suicide in the European Union

Meanwhile, the European Union is responding inadequately to the coronavirus epidemic. Instead of fighting the disease (widespread testing, treatment of infected people with chloroquine, emergency care of the sick with artificial respiration and recombinant interferon Alfa 2B), it is preventing its hospitals from becoming overcrowded (house arrest of the healthy population) [5]. Its economy has come to a standstill and the European Central Bank is announcing a 5% recession if this situation lasts two weeks, but it will probably be six. When the peak of the epidemic has passed, it will no longer be a major economic power and the world will be organized in a new way without it.

[4] “The Quincy Pact only protects the King of Arabia, not his heir”, by Thierry Meyssan, Translation Pete Kimberley, Voltaire Network, 23 October 2018.