UPDATED Dominic Cummings specifically stated now in the press briefing that he had been eager to “get back to work to get vaccine deals through, move regulations aside” and that is why he drove to Barnard Castle to test his eyesight.

Now it may be entirely a coincidence that the place to which he chose to drive for his eyesight test happened to be the site of the major factory of GlaxoSmithKline. It may be an entire coincidence that two days later, on the very day Cummings actually started work back in Downing Street he has stated was “to get vaccine deals through”, GlaxoSmithKline announced an agreement to develop the vaccine.

It is however plainly not crazy to ask the question. This astonishing Twitter pile-on against Clive Lewis for retweeting my piece says something very worrying, when you consider that the large majority of those piling in are supposedly part of the “opposition” and include many journalists. A society where it is viewed as a sign of madness to look into the prospect of corruption involving a company as massively, provenly corrupt as GlaxoSmithKline and a figure as shady as Cummings, is a very unhealthy society indeed.

One red flag to me is the number of trolls claiming GlaxoSmithKline only has a small and remote office in Barnard Castle. This is not the entire site, and in a further £96 million investment two new blocks are in construction or recently finished: 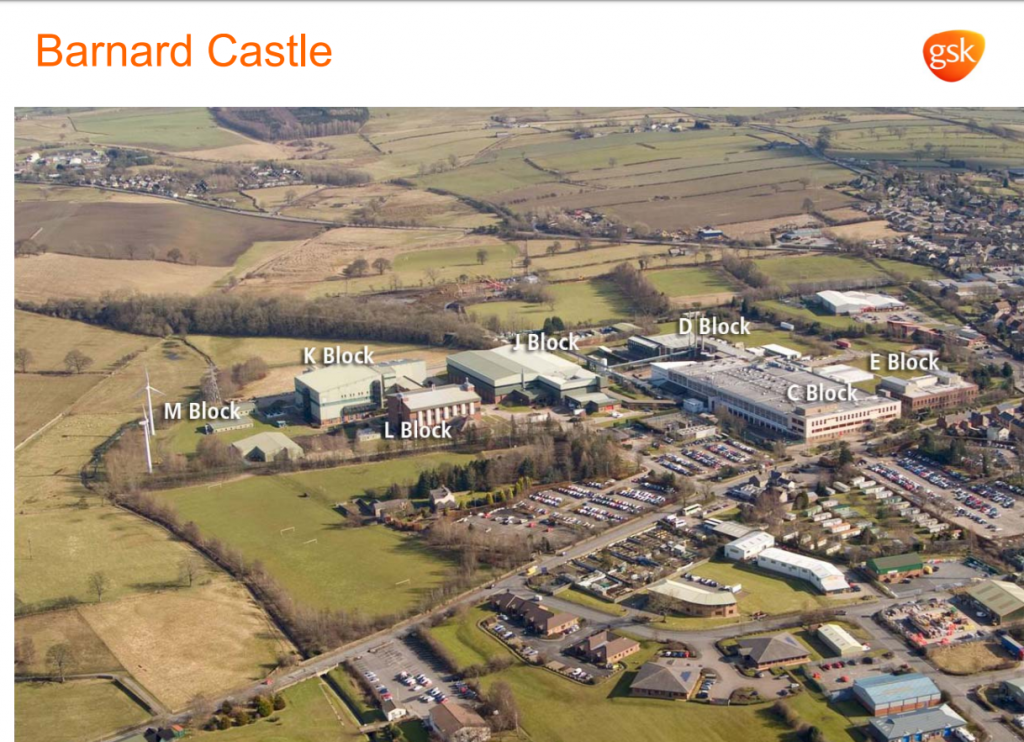 So to return to my original posting:

Despite the fines, these frauds were still massively profitable for GlaxoSmithKline. A perfunctory search on the company brings up similar frauds and fines it perpetrated in South Africa and India. All this within the last decade. I cannot find any information that anyone was jailed, or even sacked, for these criminal activities. It is absolutely astonishing that such an habitually criminal enterprise carries on serenely in the UK. And what is particularly interesting today is that it carries on its crooked activity from its massive manufacturing and research base in Barnard Castle, County Durham.

On 12 April Dominic Cummings was seen in Castle Barnard during lockdown. Two days later, GlaxoSmithKline of Barnard Castle signed an agreement to develop and manufacture a Covid-19 vaccine with Sanofi of France.

Of course, that could be coincidence. As a child I lived in nearby Peterlee and I know families may go to Barnard Castle just for relaxation. Even when that is illegal. But GlaxoSmithKline Barnard Castle has been working 24/7 during the coronavirus crisis including the weekends. It was working.

The government’s extraordinary refusal to confirm or deny Cummings visit to Barnard Castle appears to make little sense if he just went there for a walk.

But surely if he was discussing Covid-19 vaccine business on behalf of the government, that would answer all the critics of his trip, would it not? They would want to trumpet it from the hills? I mean to believe otherwise, you would have to propound a crazed conspiracy theory. You would have to believe that criminal activity may be occurring again involving GlaxoSmithKline of the kind which might lead to fines of 37.6 million pounds for overcharging the NHS, or of three billion dollars for fraudulent medical claims in the USA. Nobody sane believes that kind of thing, do they?

UPDATED: I should never be surprised by the puerile nature of debate on the internet, but I frequently am. There appears to be organised pushback stating that this article is only speculation. Of course it is. It states a number of facts not generally known, and wonders if there is a connection. It does not claim to have proof Cummings visited GSK, let alone of what he did when there. But both GSK and Cummings are known bad actors.

The even sillier argument is that Barnard Castle is the research and manufacturing centre and not the corporate HQ and therefore no deal could have been done there. Because when a company is involved in a massive criminal conspiracy, as GSK undeniably was in the multi-billion fraud in the USA or its price-fixing to the NHS, such criminal actions obviously can only be arranged in the main London company boardroom during normal working hours with lots of people around and the maximum chance of inconvenient people finding out what is happening? That is a stupid argument.

Equally, those who claim I have uncovered a criminal conspiracy are wrong. I have not. All I have done is put together some circumstances around Cummings denied trip to Barnard Castle, that could potentially provide a more reasonable explanation for why he would take the risk of going there, and why the government would stake all politically on denying it, than a day trip for a walk for his wife’s birthday. I have not proven anything.