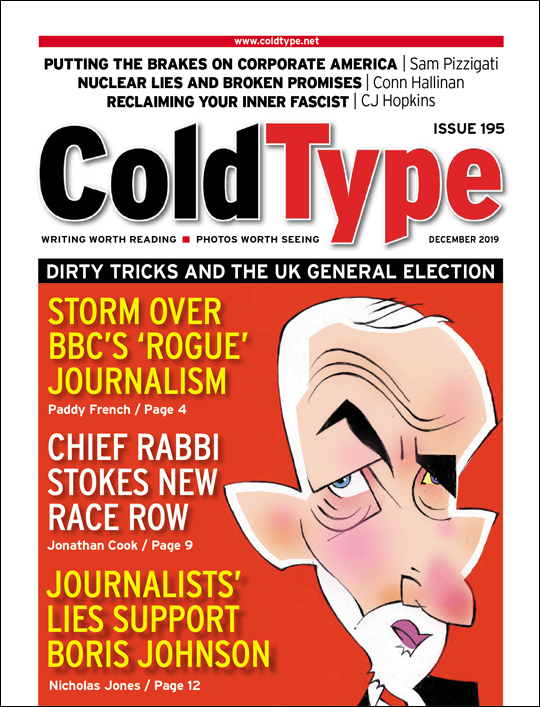 DIRTY TRICKS: If you want to see fake news in action, look no further than the build-up to this month’s UK’s General Election, which is more remarkable for its subterfuge, lies and evasion than for any clear political clarity or deep insight. In our three top stories, Paddy French finds strong bias in a recent BBC Panorama programme on antisemitism in the Labour Party, Jonathan Cook tells how the Chief Rabbi’s intervention into the election has made the Jewish community less safe, and Nicholas Jones exposes the writers at various right wing British tabloids newspapers who are making this the vilest election he has ever witnessed. Other stories include Conn Hallinan on the nuclear crisis facing the world, and  Caitlin Johnstone’s account of the Guardian’s hypocrisy in its treatment of Julian Assange. Trevor Grundy details the race row that is engulfing the legacy of Mahatma Gandhi, CJ Hopkins tells how to reclaim your inner fascist, and Mark Kelly writes about Pink Floyd. Plus much more.

All 195 issues of ColdType are available at
www.issuu.com/coldtype