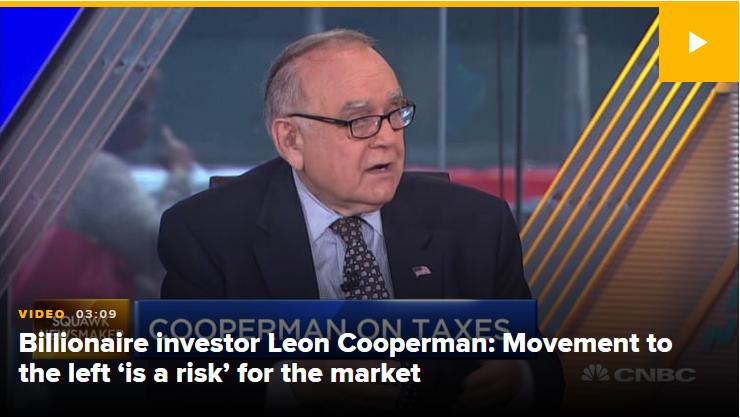 In response to a rising progressive tide in the United States, a new genre of stories has emerged in corporate media: rich guys warning against taxing them, or really changing anything about the system at all. Just as the press are keen for you to know that Medicare for All is a very bad idea (FAIR.org, 4/29/19), they are equally anxious to make sure that the voices of beleaguered, unheard plutocrats are given as much of a boost as possible. 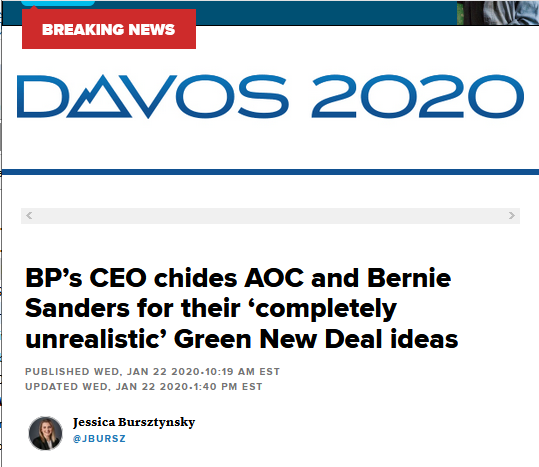 Is the opinion of the CEO of the world’s fifth-largest oil company that Bernie Sanders and Alexandria Ocasio-Cortez “have a completely unrealistic idea of the complexity of the global energy system” (CNBC, 1/22/20) really “breaking news”?

To sum up the story, a CNBC journalist went to Davos (where the cheapest hotel room last year was $1,000 per night) to get ideas about socialism and the environment from the CEO of BP, one of the 100 corporations responsible for over 70% of the world’s emissions. At no point did Bursztynsky warn the audience or even allude to the enormous conflict of interest the oil multi-millionaire might have in discussing solutions to the climate crisis. Instead, his views are presented as a straight and important news story.

In contrast, the first sentence primes the reader against AOC and Sanders by presenting them as “far left” – in other words, as some sort of out-there crazies, even though their ideas are supported by the majority of the American people (FAIR.org, 1/23/19). It allows Dudley to claim that there is a distinct “lack of realism” from his critics (emphasis added):

“There’s just a lot of people, very well-meaning people, who want to believe that there is a simple solution,” Dudley said at the Abu Dhabi International Petroleum Exhibition & Conference.

Jeez, I wonder what oil CEOs at an energy forum in a Mideastern monarchy think about renewable energy? Good thing CNBC is on the case. 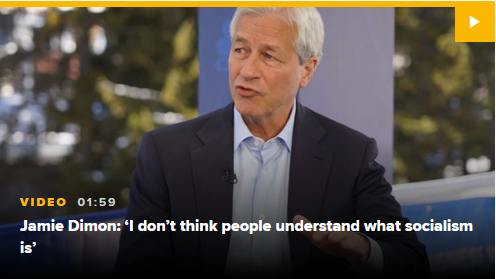 If you don’t understand what socialism is, the CEO of JPMorgan Chase will fill you in (CNBC, 1/22/20).

Not content with hearing only one CEO’s opinion, on the same day CNBC (1/22/20) published another Davos interview, called “JPMorgan CEO Jamie Dimon Takes on Socialism, Says It Will Lead to an ‘Eroding Society,’” where Dimon told readers that “socialism has failed everywhere it’s been tried” and claimed that millennials don’t understand what it really is. A billionaire investment banker doesn’t like socialism!? Stop the presses!

CNBC is a particularly frequent culprit of publishing non-news such as this. Last year it ran an article (6/20/19) titled “Bernie Sanders ‘Doesn’t Have a Clue,’” featuring supposed wisdom from multibillionaire Goldman Sachs alum Leon Cooperman, who stated bluntly: “We have the best economy in the world. Capitalism works,” and that Sanders’ “far-left” agenda is “counterproductive.” “I’m not in favor of raising taxes. Taxes are high enough,” Cooperman predictably said.

Neither article mentioned JPMorgan and Goldman Sachs’ role in the 2008 global financial crash, the up to $29 trillion bailout their industry received, and how these corporations need capitalism to continue regardless of whether it “works” or not. Instead, these tycoons’ bland statements are treated as important facts from experts. Media present their position as CEOs of oligarchic corporations as making their opinions inherently noteworthy. That might be true on some issues, but on questions like this, their invested positions actually make them less credible.

Yet CNBC (4/16/19) not only allowed United Healthcare CEO David Wichmann to claim that Medicare for All would “destabilize the nation’s health system,” leading to a crisis and a “severe impact on the economy,” without a word of scrutiny, it also bolstered his credibility, telling readers that he “rarely discusses politics,” implying that this was a highly reliable expert opinion, and certainly not scaremongering from a giant for-profit organization making billions annually off the sick.

It is already debatable if plutocrats’ entirely predictable pronouncements on economic issues are even news at all, given their obvious incentives. And there is also the question as to whether CNBC should be using its considerable resources to give a megaphone to some of the most powerful people in the world, letting them define and set the agenda of public debate. But to constantly feature these people without even mentioning the massive and glaring personal and economic conflict of interests they hold in pushing these ideas is tantamount to journalistic malpractice. 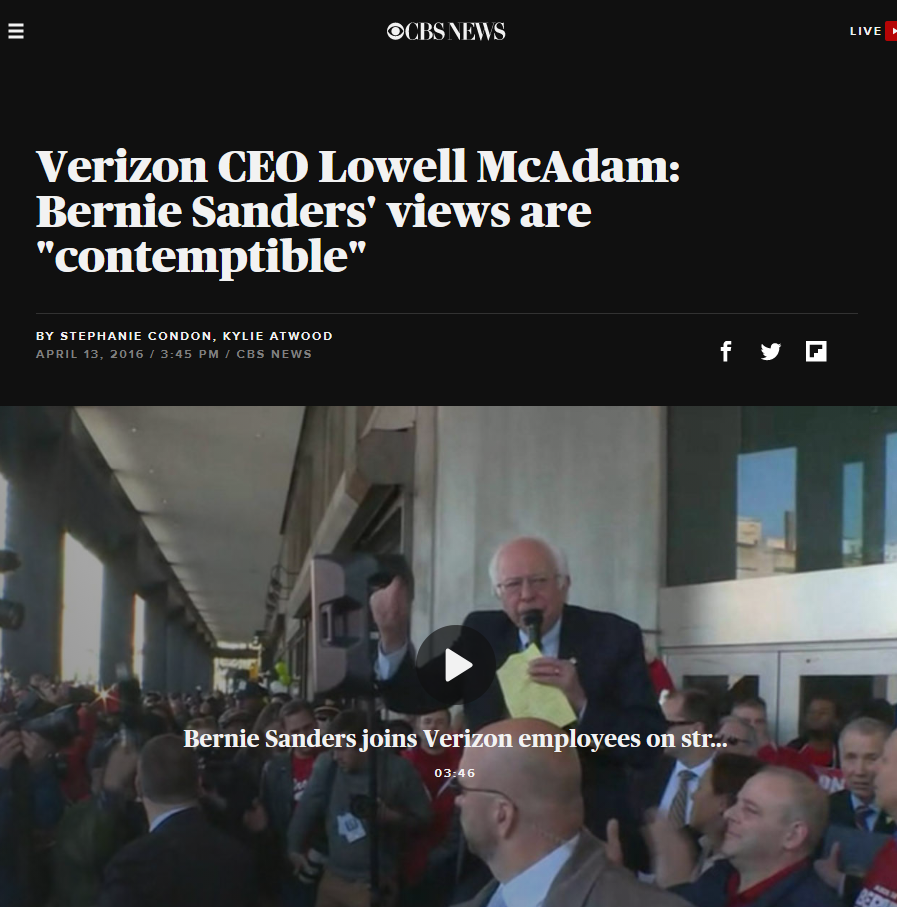 “Big companies are an easy target for candidates looking for convenient villains for the economic distress felt by many of our citizens,” declared Verizon‘s CEO in a blog post that was reported as news by many media outlets owned by big companies (CBS News, 4/13/16).

In many of the write-ups, Sanders came across as a dishonest rabble-rouser readying the pitchforks, rather than a popular political leader critiquing the greed and power of the extremely wealthy. Is a LinkedIn blog post really newsworthy enough to garner so many national headlines? Evidently, if it says the right thing, then the answer is “yes.”

The fight for a $15 minimum wage has also, predictably, been attacked by restaurant owners who are among the stingiest when it comes to wages. Fox Business (6/6/19) repeated former CKE Restaurants CEO Andy Puzder’s claims that “Bernie Sanders’ proposals will kill economic growth” and lead to a reduction in wages for those he claims to represent. Surely it would have been more honest to at least mention that the ex-boss of the Carl’s Jr. and Hardee’s restaurant franchises might have a conflict of interest on the matter?

And surely when Ken Langone described Sanders as “the Antichrist”—a particularly ugly epithet to hurl at a Jewish politician—the Wall Street Journal (5/10/18) should have at least pointed out that the multibillionaire founder of Home Depot and major Republican donor might be a biased commentator. And it certainly was not obliged to present a man whose net worth has increased by nearly 60% in five years as some kind of ultra-philanthropist, a modern-day Francis of Assisi. 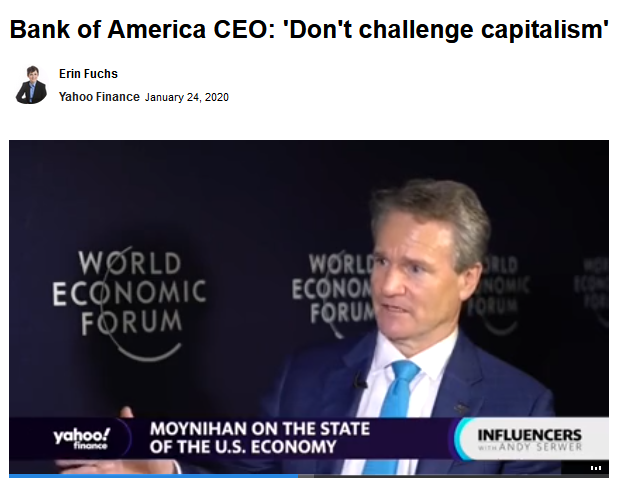 Bank of America’s CEO spells out what used to be an unspoken rule in US politics and media (Yahoo! Finance, 1/24/20).

Yahoo! Finance (1/24/20) offered its own entry in the musings-from-Davos genre, interviewing Bank of America CEO Brian Moynihan, who told editor-in-chief Andy Serwer: “One of the things we’re trying to get everybody to understand, is you can be capitalist and make progress for society. But don’t challenge capitalism.” Yahoo!’s write-up did mention that Moynihan had been paid $26.5 million in 2018, and that he “has faced scrutiny over politicized issues like executive pay.”

By reporting what multimillionaire and billionaire CEOs say about efforts to change a system they so clearly have a huge stake in staying the same, without highlighting, or even mentioning, their conflict of interest, corporate media are doing their audiences a disservice—effectively propagandizing them into supporting a model their owners and advertisers benefit from. If media are to perform their role as the fourth estate properly, they should really be scrutinizing power, not uncritically amplifying it.