China is making more progress in the fight against the novel coronavirus while other countries see increased problems. Meanwhile the global economic damage that the epidemic causes is slowly coming into view.

In our last discussion of the Coronavirus epidemic in China we criticized a statistical change made by the Chinese authorities:

The Chinese government has added a new category of infections to the total number of COVID-19 cases. So far there were two published categories. ‘Suspected cases’, which were people who may have come in contact with the virus and showed flu symptoms, and ‘confirmed cases’ of patients who fell ill and where the virus was found during tests. Now people who show signs of pneumonia will be added to the confirmed COVID-19 cases even when the tests do not find the nCov19 virus in their body.

The new count will thereby include a lot of people who simply have a common flu. That seems to make little sense.

Those who had fallen into the new category had a death rate that was much smaller than the original COVID-19 cases. That proved that a simple diagnose of pneumonia is not a reliable indicator for a nCoV19 virus infection.

Yesterday the Chinese authorities reversed their position. ‘Clinically diagnosed’ cases, people with only signs of pneumonia, are no longer included in the published numbers. This led to a drastic fall in new cases reported yesterday. 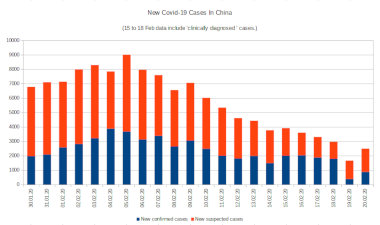 The data reported today showed a drastic increase in cases as two prisons, which had for some reason never reported any cases, were suddenly included with a total of some 500 new confirmed and suspected cases. The communist party manager of at least one of the prisons was immediately removed from his job.

The general trend of newly confirmed or suspected cases has been going down since February 5. The number of remaining confirmed cases has started to sink as there are now less new patients per day than recovered ones. China’s rigorous handling of the outbreak, after a too slow start, is a great success. There will be at times new clusters suddenly emerging like the two prisons today. But a greater catastrophe has been avoided.

The total numbers as reported by China today:

As of 24:00 on Feb 20, the National Health Commission had received 75,465 reports of confirmed cases and 2,236 deaths in 31 provincial-level regions on the Chinese mainland and the Xinjiang Production and Construction Corps, and in all 18,264 patients had been cured and discharged from hospital. There still remained 54,965 confirmed cases (including 11,633 in serious condition) and 5,206 suspected cases. So far, 606,037 people have been identified as having had close contact with infected patients. 120,302 are now under medical observation.

While China has done a good job, at an enormous cost, to contain the outbreak, others are far less efficient. Japan has created a mess when it quarantined the cruise ship Diamond Princess in Yokohama with 3,700 passengers and crew members on board. Originally there were ten cases on board. Now 634 on board have tested positive for the virus.

Dr. Kentaro Iwata, an experienced specialist for infectious diseases, visited the ship under some difficulties. He has reported that there were no significant isolation measures taken on board of the ship. There were no safe areas. Infected and uninfected people mixed during meals. After the visit the doctor put himself under quarantine and recorded a video with his findings.

It seems that Japan’s feared bureaucracy has handled the issue without the advice from any specialist. Cruise ships are perfect to spread diseases. They have central air condition and central septic systems that can spread viruses to every room on board. There are many places on board which are commonly used. The crew is usually housed in less than perfect conditions. Any suspected cases should have been taken off board immediately. But these were simply told to stay in their cabins which they, of course, did not do.

The Japanese military has some troops working on the ship but they are only now taking protective measures which are still less than sufficient:

About 50 staffers from the Self-Defense Forces are working on the vessel to examine the passengers, disinfect cabins and transport patients. The ship was quarantined for two weeks off Yokohama on Feb. 5 to prevent COVID-19 from spreading in Japan.

At a news conference, Kono admitted that the Defense Ministry applied the standards — which are higher than those in use by health ministry officials working on the vessel — after viewing a video from the ship posted by Dr. Kentaro Iwata of Kobe University Hospital, who joined the disaster-relief team as a veteran infectious disease specialist.

On Wednesday 500 Japanese passengers who had tested negative were let go from the ship without further measures. But many of them will carry the virus as more new confirmed cases from the ship still appear daily. These people should have been further isolated. Letting them leave without such measures guarantees that new outbreaks will soon appear throughout Japan.

This situation might have developed due to political pressure. Japan is supposed to hold the summer Olympics later this year and it may have wanted to avoid bad headlines. To me it seems that there will be no Olympics this year and that Japan’s Prime Minister Shinzo Abe will soon hear some harsh public criticism.

Another big clusters established itself in Daegu, South Korea, where people from a Christian sect infected each other during mass. There are currently some 130 such cases and some 70 more spread elsewhere in South Korea.

Iran has a smaller cluster in Qom with 14 cases. It closed all schools and seminaries and suspended religious gatherings in the city. Other countries report single new cases or small clusters. This will continue as the disease races around the world. Large new outbreaks will appear in those many countries which have less than perfect medical systems or where the authorities want to suppress news of a smaller outbreak.

In the Ukraine rioters had to be brought under control when they protested against quarantining evacuees from China near their villages.

The economic ripple effect of this epidemic and of the enormous quarantine in China will be huge. It will be felt everywhere but especially in highly developed industries:

The impacts on China both intrinsic and psychological are still vastly under estimated. This is the largest containment/effective imprisonment via quarantine of human being in world history. People are assuming no ripples from that.

The biggest factor that’s not understood is the non linearity of supply chains. A two week total shut down *does not* mean a two week delay in products to consumer. This is very different from the tariff impacts, where pricing was adjusted.

A single component missing in a 500+ part product means all levels of production are moot. Autos and consumer electronics are obvious examples. We have heard from multiple auto players and Jaguar has publicly stated they have sub 2 weeks of operating inventory.

Just In Time (JIT) production is a form of operational leverage. And like all forms of leverage, there is a non linear downside effect. People are not putting it together that this is a very big deal. It’s not a 1 month hit. It’s not a 1 quarter hit. It’s an annual hit *right now*.

Some large factories which depend on parts from China will soon have to shut down. Then their other suppliers will also have to cease production. The loss of income will be felt throughout the local economies.

The effects of the epidemic may well lead to an end of the globalization of production processes. Companies will go back to buy locally to be as unaffected as possible from similar future incidents. This might well be the most positive long term outcome of this epidemic.